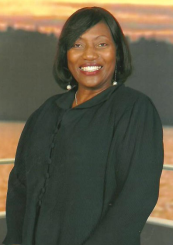 Evangelist Rosemary Sumpter was born on May 11, 1958 in St. Helena Island, South Carolina. She was called by God to preach the gospel on March 24, 2002 and was ordained on August 25, 2002. “Be instant in season, out of season, reprove, rebuke, exhort with all longsuffering and doctrine.”(2 Timothy 4:2)

Evangelist Sumpter is a 1976 graduate of Beaufort High School, Beaufort, South Carolina. She attended Beaufort Technical College from 1976-1977. She received her Associate Degree in Business, Office System Technology and Medical Secretary from Spartanburg Technical College in 1997. She is a 2002 graduate of C.E. Graham Baptist Bible College Institute Seminary, Columbia, South Carolina receiving a certificate in Counseling. She is a 2004 graduate of the New Life Theological Seminary and the Williams-Clemon-Davis Bible Institute of Orangeburg, South Carolina receiving her Master’s Degree in Theology and will be pursuing her doctorate degree. On January 26, 2014, she was installed as the Assistant Pastor of United Temple of Praise Deliverance Church of Spartanburg, South Carolina. She currently serves National Mother and General Supervisor of Women’s Department of the United Temple of Praise Deliverance Churches, Inc.

Evangelist Sumpter thanks God for His grace and mercy. She remains humble before the feet of Christ and is keeping Him number one.